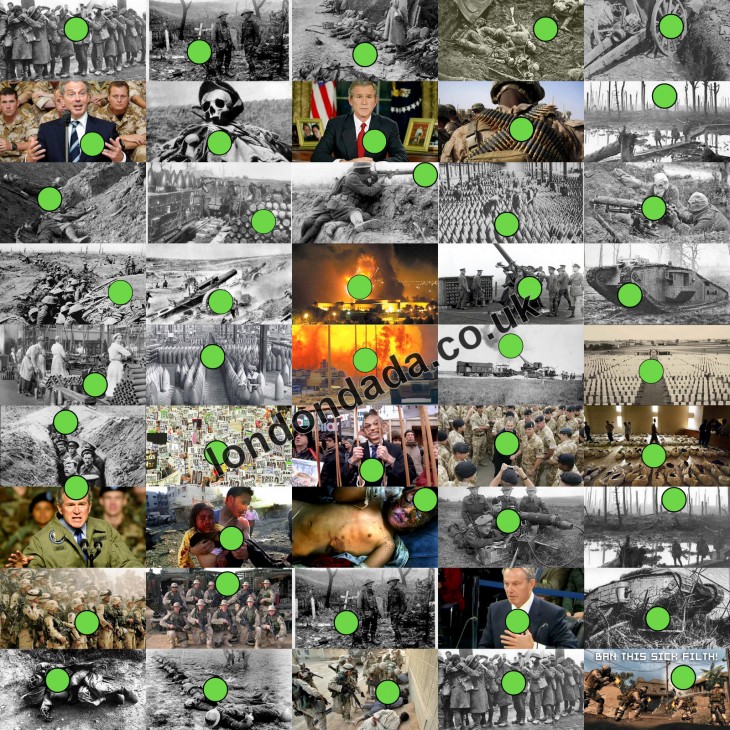 The Bullet Holes of Peace (v.1)

_Context____________________________________________________________________________________
Dada was founded in Zurich in 1916 essentially as a protest movement against the
horrors of WW1 – a totally unnecessary war that killed millions and began by corrupt politicians
who brainwashed the masses into participating. By-passing WW2, a war that was legitimate
of course, in that Hitler was aggressively threatening the entire world…and on past Vietnam, a war barely now mentioned in which 52,000 American soldiers died for an idea and over a million Vietnamese slaughtered…to the Iraq debacle that had strong echoes of similar lie-based initiation, pointlessness and mass killings as WW1; this time initiated by two despicable leaders, backed up by their cowardly political parliamentary or Capitol Hill colleagues, each motivated by personal career advancement.

Here, in this penultimate London Dada work, Dada goes full circle, back to its roots of being an
anti-war protest art movement, with almost 100 years gone by and with the terrible war crimes
that were Vietnam and Iraq, added.